Get instant property alerts for www.coronadelmarhomesforsale.com

Get the MoveTo App

Dana Point is located in Orange County.  This is one of the most beautiful coastlines and harbors along the Pacific Ocean. Dana Point is located just south of Laguna Beach and west of San Juan Capistrano. Dana Point has very easy access from State Route 1.  The population is approximately 33,000 people.  Dana Point was named for the headland of Dana Point which in turn took its name from Richard Henry Dana Jr., author of Two Years Before the Mast. There is a replica of Dana’s ship, the Pilgrim in Dana Point Harbor, which is now used as a classroom by the Ocean Institute. This area is a designated California Historical Landmark #189.

Dana Point is a more affordable beach town, in Orange County, than cities such as Laguna Beach or Newport Beach. There are many home and neighborhood choices available in Dana Point, from the luxury custom built properties of Ritz Cove to the large country style properties in Del Obispo.  Let the professional realtors of the Franco Team help guide you through the large array of choices. Dana Point is sub-divided into five sections; Capistrano Beach, Monarch Beach, Lantern Village, Dana Hills and Del Obispo.  Dana Point is situated on a bluff, so there are wonderful views to be had including the Pacific Ocean, white water, Catalina Island, Dana Point Harbor and breathtaking sunsets. The home values range from 350,000 dollars for condos or starter homes to four million dollars for custom built beach front estates. Home values are dependent on views, location, size and neighborhood amenities. There are both guard gated and non-guard gated neighborhoods to choose from.

Dana Point students attend schools in the Capistrano Unified School District. There are several elementary schools and middle schools that serve the community of Dana Point. There is one only one high school for Dana Point, Dana Hills High School, it is one of the oldest high schools in the area, opening in 1972.  Dana Hills High School has one of the strongest cross country programs in the US; they have won the California state title in 1988, 2007, 2008, and 2009. There are also eight private schools in the Dana Point area serving 1800 students.  These schools include Gloria Dei Lutheran Pre-School, Monarch Bay Montessori, St. Edward the Confessor Parish School and West River Academy.

Dana Point has wonderful year round weather to enjoy the many outdoor activities that the area has to offer. There are seven miles of coastal bluffs and rolling hills skirting the Pacific Ocean.  There 2500 boat slips and moorings available at the Dana Point Harbor.  The Doheny State Park is 62 acres of open space that is used for camping, picnicking, swimming, surfing, tidal pool exploration and beach going.  There several beaches in Dana Point including Salt Creek Beach, Monarch Beach, Dana Strand Beach, Baby Beach, Poche Beach and Capistrano County Beach.  There are three incredible surfing areas in Dana Point; Doheny Beach, Dana Strands and Salt Creek.

Discover Oceanfront living on an unforgettable Lot. With views of the majestic Five Star Ritz Carlton on your left, waves crashing along the wide stretch of beach, and t...

Crowning the very upper echelon of Orange County s unparalleled ocean-view estate occupies a league of its own at The Strand at Headlands in Dana Point. The modern coasta...

When only the best is what you desire, your search for the ultimate seaside sanctuary will end at this sublime custom estate at The Strand at Headlands in Dana Point. Ind...

Fully entitled, coastal commission approved development deal for a 100-key luxury hospitality build. Feel free to reach out with any questions or for further detail

17 Coral Cove Way boasts one of the best views available in either Strand, offering breathtaking vistas of the Pacific, surf, coastline, city hills, and snow-capped mount...

Unveiling One Of Southern California’s Most Opulent Estates Prominently Positioned In The Guard Gated Lower Enclave Of The Strand At Headlands. Experience Modern Coastal ...

PRICE IMPROVEMENT! This all flat 21,750 sqft parcel represents the opportunity to build your coastal dream estate on one of the few land offerings on the oceanfront and ...

Custom Home site with poured concrete basement is located in the prestigious gated community of The Strand at the Headlands - Southern California's most elegant gated be...

Ready to treat yourself to the luxurious indoor-outdoor lifestyle most only dream of? Ideally located in the prestigious, 24-hour guard gated oceanfront community of Nigu...

Embrace all that oceanfront living offers in this incredible home on the sand. Immerse yourself in the tranquil serenity of this immaculate property in the exclusive Dana...

DON'T MISS THIS OPPPORTUNITY! OCEAN VIEW! This Monarch Bay home is located in The Mall in the prestigious gate guarded community in Dana Point. With 180 degree view of th...

Promising to elevate your lifestyle, this coastal sanctuary is ideally positioned in the coveted gated enclave of The Grand Monarch. Just a five-minute stroll to the beac...

Welcome to 51 Monarch Beach Resort South, situated in one of the most opulent and exclusive guard-gated communities in all of California. This completely turnkey ocean vi...

Welcome to 43 Ritz Cove, situated in one of the most opulent and exclusive guard gated communities along the California Riviera. This completely renovated single-level, ...

White water and coastal views in the private gated community of the Strand at the Headlands will take your breath away! Featuring an exceptional elevated location with no...

The Ocean view home you’ve been waiting for! This newly built, mid-century modern, custom single level, located in Monarch bay Terrace was designed and built with the u...

This exquisite, single-level custom home offers magnificent views of the ocean, Catalina Island and the beach coastline. Enter the grounds through a private front gate ... 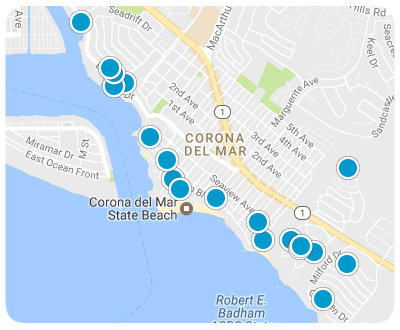 The real state is exquisite in Corona Del Mar. There is a large variety of properties to choose amongst from small condos to large custom built waterfront estates. If you are looking for your dream property, let the Franco Team help you in your search for a breath taking new residence. Corona del Mar offers spectacular views of the Pacific Ocean, Catalina Island, Newport Coast, Newport Harbor, canyons, city night lights and breathtaking sunsets. Due to its cliff side height, some homes have views all the way to Palos Verdes. There are many different neighborhoods in Corona del Mar to choose from including; Cameo Highlands, Corona Highlands, Harbor View Broadmoor Homes, Harbor View Hills, Sailhouse and Sandcastle. Each neighborhood is distinctive, offering different views, home styles, amenities and home values. The home values in Corona del Mar range in price from 650,000 dollars to 35 million dollars plus. There are both guard gated and non-guard gated neighborhoods to choose from.

Take advantage of the beautiful California weather with all the outdoor activities that Corona del Mar has to offer. For beach goers there is the Corona del Mar State Park Beach. The The Crystal Cove State Park offers a full range of recreational activities including horseback riding, camping and hiking.